Ayscoughfee Hall is a unique survivor of a family house from the mid-15th century.

Dendrochronological or tree-ring dating on some of the original roof timbers have been dated to around 1450, making the Hall over 550 years old.

What makes Ayscoughfee Hall particularly unique is that it was primarily a family home from 1451 to 1902.

Throughout the centuries the Hall changed, with each owner adapting the building to accommodate their needs and to reflect the fashions of the time. This is seen by the Gothic inspired Victorian frontage, the Georgian Adam style ceiling in the galleried Entrance Hall, and the many exposed Medieval features throughout the Hall.

The prominent Johnson family were the longest owners, resident from 1658 to 1864.  Afterwards it was home for a succession of tenant families, before being purchased by the people of Spalding in the early 20th Century. Since then, it has housed Belgian WW1 refugees, been a library, a school and Council Offices. Today, it is the District's museum.

In 2003 Ayscoughfee Hall closed for renovation and refurbishment, funded by the Heritage Lottery Fund, South Holland District Council, Lincolnshire Tourism and the Friends of Ayscoughfee. The Museum reopened in June 2006 to acclaim, and continues to display......

In 2008, Ayscoughfee took part in an exciting project with NAU Archaeology, which uncovered some interesting finds, including a boundary wall that was here before the Hall, and the remains of a hot house where one owners used to grow exotic plants!

If you are interested in a particular aspect of the Hall's history, the owners/occupiers or the Gardens please contact us by email museum@sholland.gov.uk 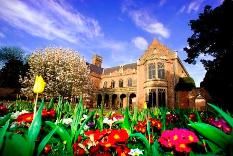