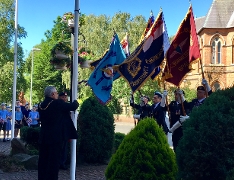 South Holland District Council hosted a celebration at their Priory Road office in Spalding on Monday June 25, with a flag raising ceremony to show appreciation of the work of the Armed Forces led by council Chairman Cllr Rodney Grocock, joined by current military personnel, veterans, pupils from St John's school, members of the public and other councillors and council officers.

The event was held as part of Armed Forces Day, the annual national campaign that gives everyone the opportunity to show their support for the men and women of the Armed Forces past and present, including currently serving troops, Service families, Reservists, veterans and cadets.

South Holland District Council Chairman, Cllr Rodney Grocock, said: "It was fantastic to see such a large and diverse turnout for the event today, bringing together people from a wealth of ages and backgrounds to recognise the vital work of our forces across the world.  It is always so important to recognise their tireless work to defend the country and its interests."

"South Holland District Council is proud to reaffirm its strong relationship with the armed forces in Lincolnshire and show our tremendous appreciation and support for our troops. It is an honour to fly the Armed Forces flag outside of our offices for the 10th consecutive year as a way of expressing our gratitude for the many service men and women who form such an integral part of our community. 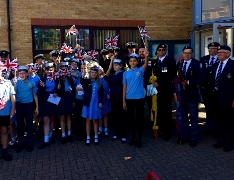 "Lincolnshire has a long association with the military and in South Holland we have a strong sense of our historic connection with the armed forces. The defence of our country is vital to every one of us and we owe a great debt to our armed forces for the difficult and dangerous job they do, courageously putting themselves in the path of danger to keep us all safe."

The flag will remain flying at the Council Offices until after Armed Forces Day itself on Saturday June 30. On Tuesday June 26 Spalding will host its fifth Armed Forces Day parade through the town centre, beginning in Hall Place from 10.30am. The parade will also include a short service by the Vicar of Spalding and a performance from local singer Craig Delaney. Visit www.armedforcesday.org.uk to find out more events taking place around Armed Forces Day.